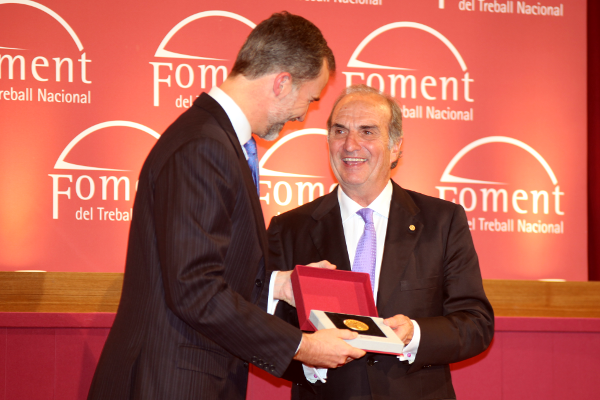 Foment awards His Majesty the King with the Gold Medal​​​​

Foment del Treball awarded His Majesty the King with the Gold Medal of the institution, handed in by the president of Foment, Joaquim Gay de Montellà. Foment recognized the Monarch with the highest distinction as “an acknowledgment for his compromise with business, economic and human progress in this country”, as Gay de Montellà expressed in his welcome speech. King Felipe presided over the ceremony for the Medals of Honour and the Carles Ferrer Salat Awards of Foment. Until now, the distinction of the main Catalan employers’ organization had only been awarded to King Juan Carlos, father of the current Monarch. The president of the Government of Catalonia, Artur Mas, the minister of Home Affairs, Jorge Fernández Díaz, the president of the Parliament of Catalonia, Núria de Gispert, the mayor of Barcelona, Xavier Trias, and other authorities attended the ceremony.

Medals of Honour for Mariano Puig and Carlo Umberto Bonomi

Foment del Treball honoured Mariano Puig with the Medal of Honour to a Business Career, the prize with which the employers’ organization recognizes the career path of businesspeople who have succeeded in promoting economic and business activity in the country. With this distinction, Foment awarded Puig for “his dedication of five decades in the family business Puig, during which Mariano and his siblings consolidated the company’s presence in Spain and they achieved a great vision of the international market thanks to the export of their brands Paco Rabanne, Nina Ricci and Carolina Herrera”. Likewise, Foment also awarded Carlo Umberto Bonomi, CEO of Investindustrial Advisors SL., main shareholder of Port Aventura, for his “ambitious expansion of the theme park, which this year sealed an agreement for two new projects of an international impact: the Ferrari Land and the alliance with the Cirque du Soleil”. Bonomi receives the Medal of Honour as Businessperson of the Year.
The Medals were delivered by the King, who described them as “very linked to this land, which pay tribute to the best business values; also to the generosity and effort, to the exercise of leadership and the capacity of innovation”.
In the same ceremony, Foment awarded four prizes on the categories of R&D, Internationalization, Businessperson of the future and Environment to:
•    Gaes (R&D)
•    Áreas (Internationalization)
•    CarlosDuran [Hoy Voy] (Businessperson of the Future)
•    Girbau Group (Environment)
The Medals of Honour and the Carles Ferrer Salat Awards of Foment are sponsored by Bankinter, BMW, La Caixa, Manpower Group and Movistar; and have the collaboration of Mahou San Miguel, Montblanc, Solred and Vueling.
Compartir