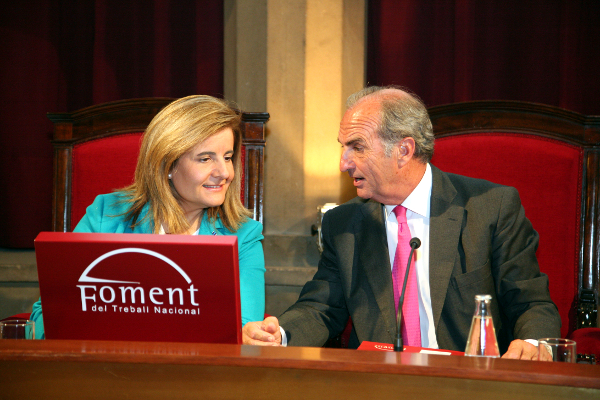 Gay de Montellà: “Catalonia, the best place to settle the most innovative companies of the South of Europe”​​

The minister for Employment and Social Security, Fátima Báñez, opens the General Assembly of the Catalan employers’ organization

Foment del Treball presented today at the General Assembly its annual accounts, the 2014 Report and, in general, the balance of a year that the president of the institution, Joaquim Gay de Montellà, considered as satisfactory “both for the results and for the self-satisfaction of a work done from responsibility and independence”. Gay de Montellà, who renewed his presidency for a second term in the elections of the past December, defends the three strategic fundaments of Foment around innovation, internationalization and training, with a compromise on working for an economy based on knowledge and innovation and on “turning Catalonia into the best place to settle the most innovative companies of the South of Europe”.

The president of Foment del Treball believes the economic recession is now over and the path to recovery “is the correct one”. “Analysts and international organizations are correcting their forecasts because our economy is growing at a rhythm superior to 3%, despite the risks of high unemployment taxes, public debt, wage inequality and the loss of purchasing power of up to a 50% of the Spanish families”.

In fact, the minister for Employment and Social Security, Fátima Bañez, who was invited to open the General Assembly, called all the associates of Foment to “create more stable and quality employment”, especially after the Collective Negotiation Agreement that the CEOE signed today with Cepyme and the workers organizations, and that, according to the minister, is “an additional injection of trust in the economic and social situation of Spain”.

The celebration of the General Assembly of Foment del Treball ran parallel to the signature this morning of the III Collective Negotiation Agreement between the Spanish employers’ organizations CEOE and CEPYME and the workers’ organizations UGT and CCOO. The agreement establishes the criteria for collective negotiation until 2017, and it also includes orientations and recommendations to promote business activity and job creation. In that sense, Gay de Montellà insisted that the pact represents in itself the confidence and the compromise of the social agents and, above all, “it is an exercise of responsibility to make economic recovery easier, beyond the concerns of the ones and the others”.

It is from that point of view that Foment del Treball insists on the need for dialogue, negotiation and pact also now, after the municipal elections of 25 May, in order to build strong governments “despite the fragmentation; governments with the capacity to govern, give stability and, above all, give trust to the citizens”.

Barcelona is, in that sense, a clear international model of collective success, reached from the will of dialogue and pact. “Barcelona is the example of progress and modernity (…) our potential to attract investment is real and the brand Barcelona is worthy of admiration all over the world”.

Catalonia, most dynamic place in the South of Europe

Regarding the working programme for the four coming years, Gay de Montellà insisted on the compromise of the institution to reinforce the virtuous triangle of innovation, internationalization and training “essential for the generation of employment. We must create qualified jobs for new services and products of a great value that rely on knowledge. Professional and university training, on one side, and continued training for workers, on the other, are the most important supports of the most developed countries”.

Barcelona and Catalonia as the main innovation pool of the South of Europe, as a driving axle for the new economy and as a territory and attractive destiny for investments and capital from technology enterprises. That is the mirror of the project Foment del Treball, and the path for the future of Barcelona and Catalonia, with the cooperation of the businesses and the institutions.

Joaquim Gay de Montellà also evaluated the Labour Reform promoted by the Government of Spain in February 2012 very positively, although there is still the need for more reforms to avoid the juridical insecurity generated by some verdicts that interpret and even contradict some of the matters of the Labour Reform.