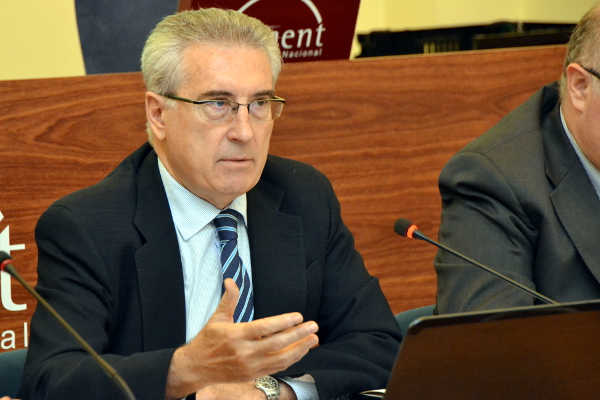 Foment del Treball presented today a proposal to create the Infrastructure Agency of Catalonia, as an independent entity of mixed public and private composition, to assess and prioritize objectively and transparently the infrastructure programs and projects that have to play a big role in improving the competitiveness and the economic, social and environmental welfare of Catalonia. According to the report For a new infrastructure managing model in Catalonia, prepared by the Infrastructure Commission Working Group of Foment, in the two coming years we face restrictive budgets, a reduction of the public deficit and a prioritization of social spending to the detriment of inversion. That is why there is a need to “prioritize more rigorously, select the most productive, sustainable and socially beneficial investments and identify the best way to include the participation of the private sector”. (See the presentation)

The document was presented today at Foment’s headquarters by its Secretary General, Joan Pujol, the president of the Infrastructure Commission of Foment, Joaquim Llansó, and the Economy Director of Foment, Salvador Guillermo. The report includes the relation of the hundred pending infrastructures that are considered as basic from a multisectoral point of view. It also reviews the twenty most urgent ones that will be tracked, lacking an agency that assesses and prioritizes programs and projects.

Amongst the twenty selected infrastructures some stand out, such as the main sections of the Mediterranean Corridor, the road and rail access to the Port of Barcelona, the rail access to the airport, improvements in the facilities for the service of Rodalies (commuter train) of Barcelona, the road connection Port – Airport and the finalization of the underground lines L9 and L10.

Claiming a new model for the infrastructure needs of Catalonia

The Infrastructure Commission Working Group of Foment del Treball made a critical review of the infrastructure investment and managing model of Catalonia, one of the leading areas in economic development of the South of Europe. Its geographic determinants (bordering situation, great length of its coastline, uneven orography and Mediterranean climatology) require infrastructures that are adapted to its necessities and that promote inversion.

The recent estimates –made by the EU– predict an increase in the traffic, the transportation of goods and the passengers’ mobility, and indicate an imminent worsening of traffic congestions, unless the rhythm of investment in strategic infrastructures accelerates. The current situation will lead to a diminishment of the strength of Catalan economy. “The radical design of infrastructures does not adjust to the economic reality of the State (…). Approximately the 15% of the goods’ road transportation in Spain takes place in Catalonia, as well as the 25% of rail traffic, the 20% of aircrafts and airport passengers, and the 17% of port traffic of goods. That means –as the report shows–, that Catalonia should receive at least those percentages of inversion from the State in each of the infrastructure types”.

Similarly, it denounces that the investment agreements from the Ministry of Public Works and Transport (Ministerio de Fomento) have not been fully respected and neither the Third Additional Provision of the Statute of Catalonia (Disposició Addicional Tercera de l’Estatut de Catalunya) to mend the infrastructure deficit of Catalonia. This regulation demanded that the investment from the state in Catalonia for a seven year period (2006-2013) would equal the percentage of Catalan GDP contribution, a 19%.

Regarding the Government of Catalonia (Generalitat de Catalunya), the Working Group indicates that it has neither been exempt of polemic regarding opportunity, cost and financing of the construction of certain infrastructures, such as the underground line L9 or the airport of Alguaire (Lleida). The real investment budget in Catalonia, including the three levels of government (State, Generalitat and local entities) has been, for the period 2002 – 2012, of an average 4.4% GDP.

The report reviews the financing systems (public, of private concession and of public collaboration) to conclude that it is necessary to demand public initiatives and systems of collaboration for the infrastructure provision. In order to make it possible, there should be an improvement in the legal system and the administrative practices to protect and balance the public interests and the contractors, as well as the incentives for investors and private financial backers.

The document also stands up for the principle of payment by usage to reflect the maintaining costs, the traffic congestion, and the air and acoustics contamination. Spain is the country with more kilometers of highways and motorways, but it has the lowest percentages of payment by their users, only the 21%, and they are concentrated in certain territories, such as Catalonia.

The Infrastructure Working Group believes there is confusion on the public and the technic role, a lack of analysis and territorial strategic and flexible planning and, in general, that there is no space for dialogue and participation.

In that sense, it claims, after 138 years, an actualization of the basic norm of infrastructures of the State, the General Law of Public Works (Ley General de Obras Públicas) of 13 April 1877. In any case, it believes the normative of the Government of Catalonia on territorial planning and the Transparency Act (Ley de Transparencia) of the State of 2013 enable the creation of independent agencies or authorities with competencies for the planning, execution and evaluation of infrastructures, similar to bodies such as the Investment Committee of the European Fund for Strategic Investments (EFSI), Débats Publics in France or Infrastructure Australia.

The main role of the Infrastructure Agency of Catalonia would be: analysis for planning, evaluation of infrastructure politics and quality of services and coordination of all the interventions that gather different administrations.

The Agency should chair a maximum of ten prestigious experts with relevant career paths (a 50% from the public administration and a 50% from the private sector), a Director and a Secretary, assisted by a Technical Department of mixed public and private composition.

Autonomous management of the Port and airports

It is essential that both the airports and the ports are fully autonomously managed, so they can better adapt their strategies to their specificities and interests, with the participation of the administrations and the closest institutions. The report recalls the protests of 2007, when the representatives of more than a hundred business companies and the academic environment demanded that the airport of Barcelona-El Prat would become a communications hub of global reference, with intercontinental links, and that the autonomic and municipal administrations and the civil society would have decision-making capacity on strategic interventions. “The advances in that matter have been scarce. That is why the business world continuously claims an individualized management of the airport that enables a better exploitation of it by the territory it gives service to”, it concludes.