Prices rise 0.3% in Catalonia in June, the second consecutive month with positive figures​​

In Spain, year-on-year CPI increases 0.1% due to electricity and food, leaving behind eleven months of fall

Annual variation of the Consumer Price Index (CPI) maintains the positive tendency that started in May. In Catalonia, prices rose 0.3% this June, two more decimals than last month. In Spain, there was an increase of 0.1%, meaning the first time with positive figures for over eleven months.

Those results are another sign of economic recovery in Spain and Catalonia, and especially of the growth of private spending. Last data shows a price rise of the two baskets related to consumption: food and non-alcoholic drinks rose 2.3% in Catalonia and 1.8% in Spain; and prices in hospitality increased 1.3% in Catalonia and 1% in Spain. The Spanish government’s last forecasts indicate a growth rate of 3.3% of GDP in 2015. 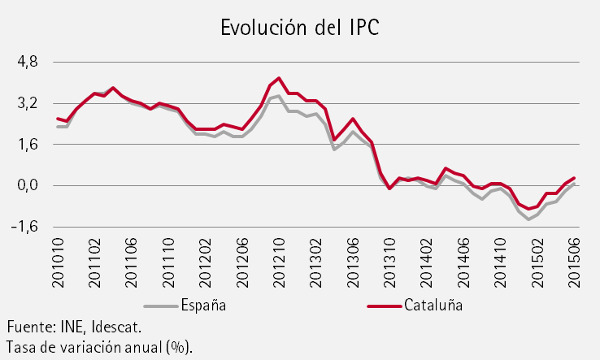 The groups with major influence on the rise of CPI, for the Spanish indicator, are housing, because of the rise in electricity prices –in relation to the drop of last June–, and food and non-alcoholic drinks, especially for the price rise in fresh fruits, potatoes and their byproducts, oils and fresh fish –comparing to the drop of the same month of 2014–.
Oppositely, prices in transport and communications keep decreasing, still influenced by cheap oil. Transport dropped 2.8%, both in Spain and Catalonia, and prices in communications fell 1.8%.
In May, Catalonia registered the first CPI year-to-year increase, of 0.1%, whilst in Spain prices still fell two decimals (-0,2%).

Monthly CPI variation in Spain, comparing May and June, is at 0.3%. Only one of the 12 baskets that form the CPI index fell: clothing and footwear, as a result of sales. The rest of groups showed an increase of prices during June.
Core inflation –excluding energy and food– accelerated one decimal in its monthly increase rhythm. The price of the steadiest components of CPI, therefore, increased 0.6% in annual terms.

The differential with the EU remains

Considering the harmonized inflation indicator (IPCA) –that allows drawing a comparison with price evolution in the Eurozone–, we can see that the inflation differential with the Monetary Union is still negative (-0,2 p.p.), as the year-to-year IPCA in Europe increased a 0,2%, whilst in Spain it remained flat. This data shows that Spain still has competitive advantages compared to the EU, despite the differential slightly reduced during the last two months. 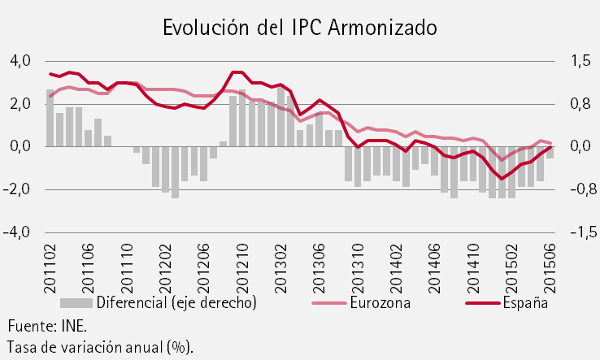